Two days before going to the Annual General Meeting of Bayer in Bonn, I decided to visit Hannover Messe 2017, probably the world’s largest industrial trade fair. I was particularly interested in the robotic field, not only as a shareholder of ABB and Fanuc, but also because I believe robots along with the internet are the steem machines of our time. It’s so exciting.

Not everything intersting for me – but a lot!

But, okay, let’s get back to business. To tell you the truth: Although I walked through all 27 fair halls (man, that was some loooooong walk), I could not look at everything with the same accuracy of course. What I show here, is only a small portion of what you could see at Hannover Messe 2017. Apart from that, I’ll be honest as well: Not everything that was shown there gained my interested. Don’t forget I’m actually a med student and while I like technology, I still am not an engineer who has an almost religious approach towards pressure valves in hydraulic systems.

However, I have so much respect for all those engineers and technicians who work on or with that terribly important stuff.

The Swiss robotic “dog” – a new competitor of Boston Dynamics?

In terms of Robots there were many, many stands – and of course Kuka was practically everywhere. But the first thing that surprised me, was this Swiss robotic dog. It is called “ANYmal” and it’s made by the company ANYbots. The salesperson technician told me, that it is not only a test object any more. They actually try to sell it for various purposes.

The robot is made by a company called “Anybotics”. It is based in Zurich and was established by a group of engineers from the world renowned ETH. Their product reminded me of what Boston Dynamics/Google has in stock – so they obviously have a new competitor.

Omron was an other company I haven’t heard of before – and this is, I have to admit, very stupid. Not only are they a leading manufacturer when it comes to industrial robots, but also I believe you could buy their stock a few years ago for a considerably low price (I believe so, only my opinion, YOU do your own research, as always. YOU know the drill by now :-)).

Anyway, they showcased a real robotic ping-pong trainer. And no, it is not some toy for trade fairs. They really put a lot of emphasis in implementing a training software: The robot always plays slightly better than the human counterpart in order to achieve a training effect.

Hiwin was another company I haven’t really heard of before. I asked one of the representative about their products and the very friendly explained to me that they are a public company and hence stocklisted in Taiwan. Also, he told me, that unlike KUKA they focus not so much on robotic welding, but more on pick-and-place, part handling, assembly and other tasks.

I liked their creative and impressive product presentation – that company is certainly on MY watchlist.

There were so many more interesting robots from Fanuc, KUKA and other companies, so many stands – and I have a lot of photos and video footage of that. But it’s simply so much that I can’t show it all! Really, I recommend to any industry and engineering enthusiast to visit Hannover Messe next year!

…and finally something relevant for medicine

Like many other universities and German research facilities, the University of Stuttgart also had a stand at Hannover Messe 2017. The used the opportunity to show a scientific robot. In short they implemented the principles of ataxia into a robot. This approach can be very in the research of neurodegenerative disorders – and to develop brain pacemakers. 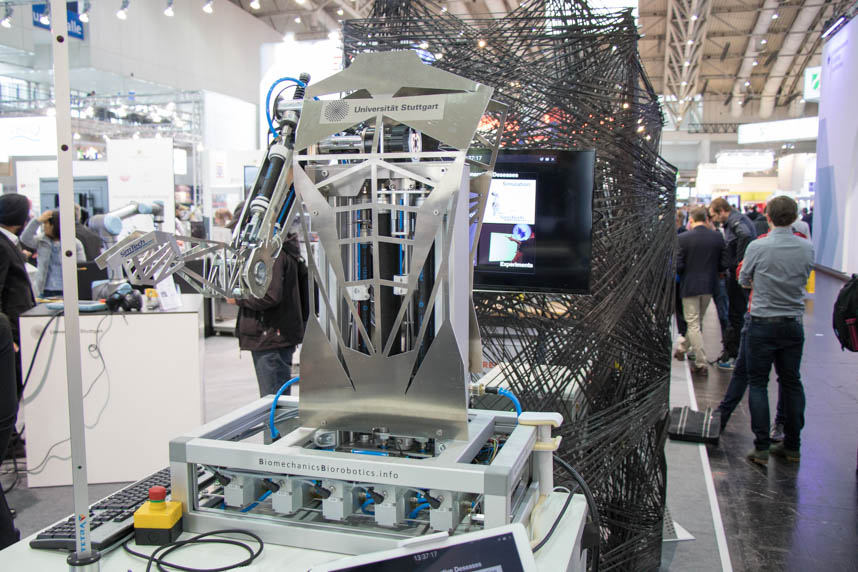 Ataxia is a disorder that can occur for various reasons and in different forms. It affects the coordination of movements. For example patients can’t sit, stand or walk steadily. In a lot of cases the cerebellum is the origin of that disorder. And that is exactly what the researchers from the University of Stuttgart simulated in this model.

Was it worth visiting Hannover Messe 2017? Yes, absolutely. Even though I’m not an engineer myself, I found it very valuable to see where industry in general is heading: Towards more automation on the one hand and more communication on the other.

Industry 4.0 is not something futuristic any more, it is happening right here, right now. Things like predictive maintenance are already becoming a reality and will further improve productivity. I believe automation brings many chances not only for shareholders, but for mankind in general!

And btw, there still will be an article about Bayer’s annual general meeting in Bonn. All I can say now is that it was …strange. And I mean really strange!