Nice, so today my tickets for Bayer’s Annual General Meeting have finally arrived. Well, the “ticket” itself is not really spectacular, it’s just a piece of paper stating the shareholder’s name as well as the number of shares registered onto that name. But that’s not all Bayer put into the enveloppe they sent to me. They also included a free bus/train ticket for the city of Bonn, which makes it easier to reach the World Conference Center Bonn, which is where the event takes place. 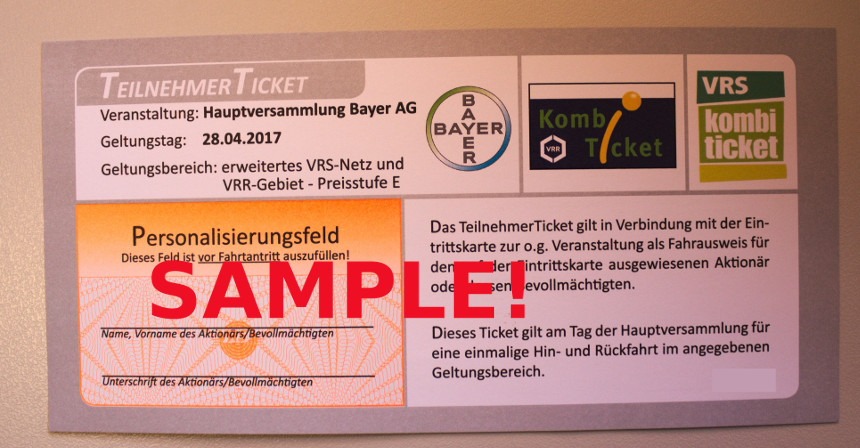 How to get to Bayer’s Annual General Meeting?

That depends on how you get to Germany. Most international visitors probably arrive at Frankfurt Int. Airport, Germany’s busiest airport. From there you can take the ICE, the German high speed train (there is a stop right at the airport, called “Frankfurt Flughafen Fernbahnhof”). Some connections will go right to the central station in Bonn, others to Siegburg/Bonn. In case you arrive at the Central Station, you have plenty of options in terms of public transport:

Keep in mind the World Conference Center in Bonn is located next to the United Nations facilities. And btw, there’s also a Marriott Hotel around the corner if you want to catch some sleep before going to Bayer’s Annual General Meeting.

Maybe on some future occasion I’ll write more about travelling in Germany using public transport – or the famous Autobahn :-)!