So let’s continue my trip to Singapore, which started in Berlin. Here are my impressions of my flight in the Etihad Boeing 777-200LR from Abu Dhabi to Singapore. You can see everything that I describe in the video below:

My flight to Singapore was via Abu Dhabi, so first of all I had the chance to check out the airport in general and the lounge in particular.

After arrival I had to go threw security again. This is, where the airport/Etihad should improve: The airport was crowded and there were no priority lines for business class passengers at least the day I was there.

Once I passed security, I went straight to the lounge. Here, I wasn’t disappointed – it is a very large lounge and the selection of food and beverages is great. So are the other facilities, like a modern business center, nice clean lavatories and even a spa area (which I didn’t use though). 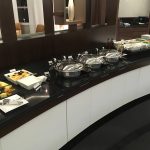 Dessert seleciton at the Etihad lounge at Abu Dhabi airport 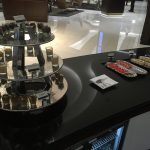 Food selection at the Etihad lounge at Abu Dhabi airport

After spending some time at the remarkable lounge I decided it was time to leave and to go to the gate. Here they had a separate business class line and also a separate bus to the airplane.

The seats in the Etihad Boeing 777-200LR aren’t as new as in the 787 on my previous flight. Nevertheless, they are in a 1-2-1 configuration, giving you plenty of privacy and direct aisle access.

As always, I was greeted by a very friendly crew and given a welcome drink as well ass a hot towel. Shortly after that, the pursor came to take my order for the dinner. I would like to point out that once again I was referred to by my name, which isn’t always the case in business class.

Apart from the fact that this was a different airplane and the seats were slightly different, everything else was the same as in my previous flight from Duesseldorf to Abu Dhabi: excellent. Etihad’s service was consistently good and it was a pleasure for me to be on board. The lounge in Abu Dhabi is spectacular not only because of its sheer size. It has so many things to offer, that you actually need plenty of time to test everything. I liked it!

For more on that, feel free to watch the video, where I show the flight in the Etihad Boeing 777-200LR in detail.