Hello everybody, so here I give my thoughts on the Delta Airlines Business Class in the Boeing 767-300. This time my trip started in Berlin, Germany. To be precise before flying to New York I spent a night in the Swissôtel at Kurfuerstendam. A nice business hotel with a great breakfast. The room I got, was a bit strange: Small single bed, but a huge bathroom with two sinks, a shower and a bath tub, overlooking the German capital city.

The next morning took a cab to Berlin-Tegel airport, which is the major international airport in the city, since Berlin-Brandenburg-International (BBI) is not in service yet. Tegel is a very old airport, you can really feel the Cold War inside. However, it operates quite efficiently from what I can say.

The Air France lounge that I was able to use, reflects the age of the airport in some way: There are no designated lavatories inside. Consequently you have to leave the lounge for some public restrooms. This isn’t the fault of Air France or the airlines or anybody else. There simply is no room to modernize the lounge in that respect.

Apart from that, the lounge is okay, but I doubt you would want to spend a lot of time there. It simply isn’t big enough and the selection of food and beverages is limited. For the short time I was there, it was perfectly alright.

Until this point I was happy with my trip. But then, a series of problems started. Once I boarded the airplane and headed to the palce I reserved weeks in advance. I thought nothing has changed, because at check-in they didn’t tell me anything.

And everything looked like it was my place – there was a welcoming card on the seat, with my name on it. However, on the seat there was not only a welcoming card, but also some dude, who claimed it was his place. I was looking at the flight attendants, who also figured out that there was something going on. But instead of resolving the situation, they turned their backs at me and decided to do nothing. I looked at my boarding pass and realized there was another seat mentioned right next to it in the middle. It was already occupied by a lady though. Now economy boarding started and many people wanted to get through. So I went a little back further and took another seat that seemed free, because there was no card on it. 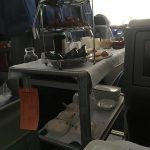 Here they bring the dessert 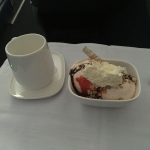 Still nobody from the crew felt obliged to tell me which was my seat and why my reservation was not in effect any more. So finally I asked the FAs, showed them my reservation, my ticket, the welcoming card. Only now they started to look into it and called some manager. After quite some time they came back and told me, that they have changed the plane from a 767-400 to a 767-300. So the only option for me to fly with them would be a seat behind the pilots rest seat. They emphasized I should be quiet during the flight, so I don’t disturb him. I did not like the idea of booking business class and being constrained in a weird way.

I asked them for the two middle seats which were not occupied. Finally they agreed. However, although the whole situation was not my fault, there was no apology and they weren’t too friendly either. It felt like I was a problem, not a customer.

I’m a fair guy, but they should not allow this situation to actually happen. And if it does, they should handle it quickly and efficiently.

Apart from that and some minor service issues like bringing me coffee instead of tea, the rest of the flight was okay. On my flight back on the other hand, the service was absolutely great again. The hard product is very good, the seat has an incredibly sleek look and is comfortable for sleeping, altough it could be bigger in width.

Apart from the problem that I described and the inconsistency of the service, the flight was enjoyable. The Delta Airlines Business Class is a product that feels very new and well-maintained. And given the fact that on my flight back, there was absolutely no reason whatsoever to complain, I would certainly fly with the Delta Airlines business class again. And in fact, I have already booked a flight with them: this time in the Boeing 777 – looking forward to it!